WELCOME TO THE 2019 PLAYERS’ VOICE AWARDS

Each artist created a unique illustration using various mediums to represent the winning player and their achievement. More than just beautiful and impactful representations of the awards and their winners, each work of art speaks to the NBPA’s mission and core purpose to embody and celebrate the Players' collective voice. 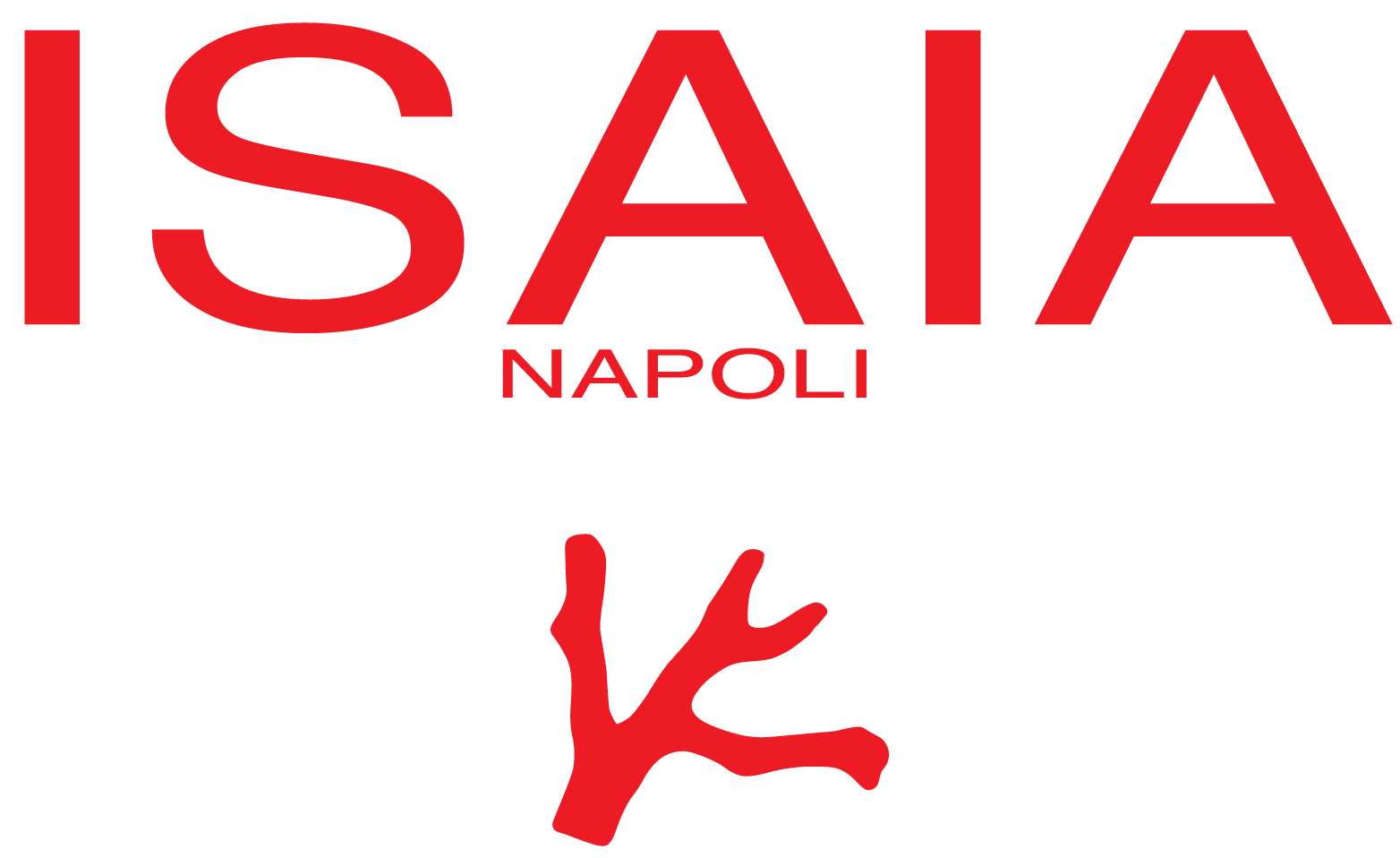 The NBPA Toughest To Guard Award

The Vera Twins' technique consists of simultaneously tackling one canvas, feeding off of one another and combining their individual styles to complete a greater piece of art. Using different shades of the human race, represent equality transversing various cultures the twins have made this feature a signature style which compliments their bright zig zag detailing seen throughout their works. With this award the Vera Twins will translate their signature style to illustrate a larger than life image of James Harden as the centerpiece of the painting surrounded by a multitude of competitors attempting to defend the All-Star. 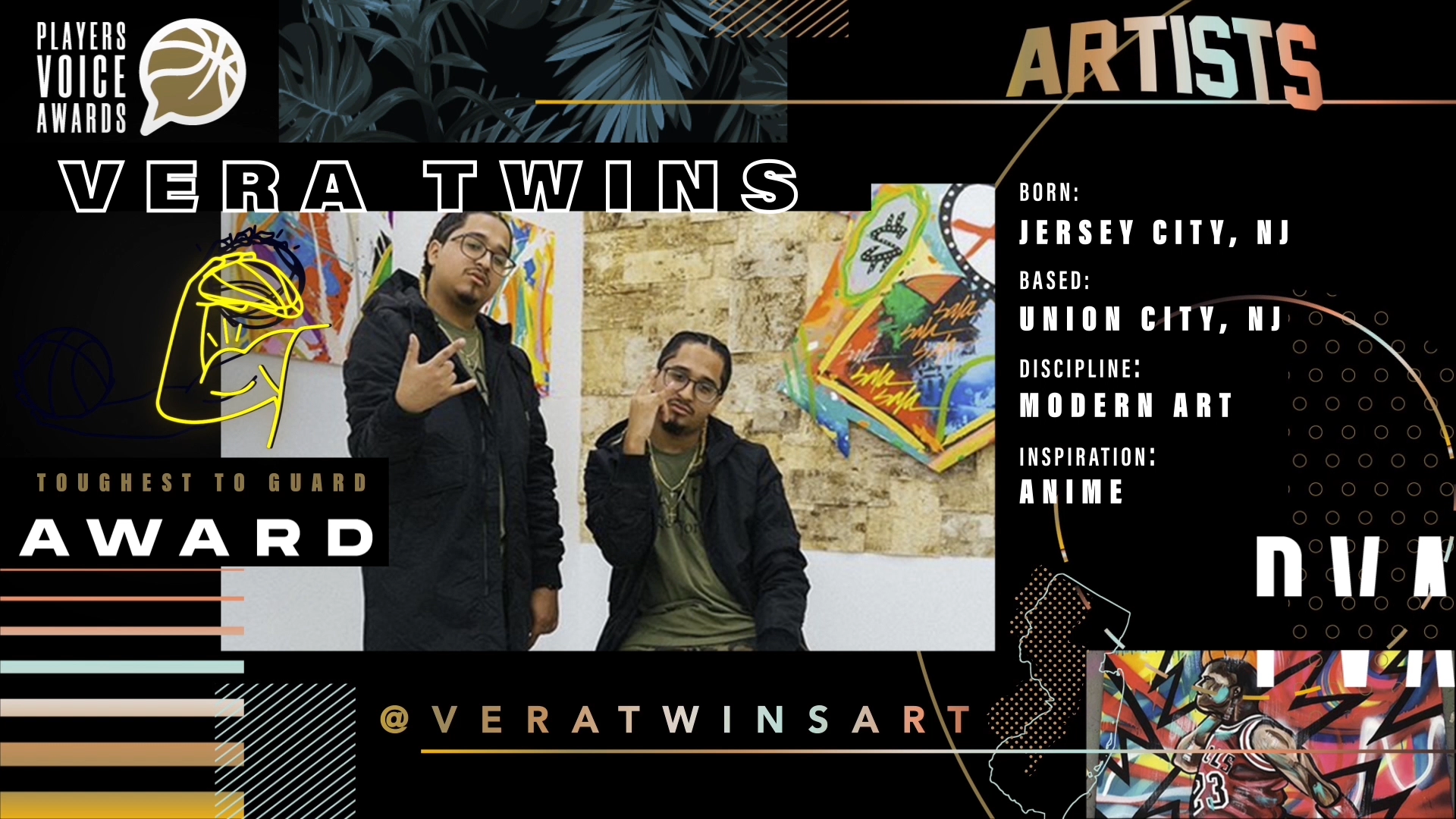 Brian Kirhagis aka BK The Artist is an internationally renowned painter whose unmistakably unique work and strikingly original concepts are laced with socially conscious messages. His signature technique of weaving together double images and hidden elements using shape and color allows him to tell the story of Lou Williams on canvas around a central element of Malcolm X. The classic image of the Civil Rights Activist with his hand resting in contemplation antecedes four images of Lou Williams representing different cities and teams. Action shots of his 6th man contributions that help him shift his game is represented in this 4x4’ similar to Malcolm being the figure that was the spark plug that shifted culture. 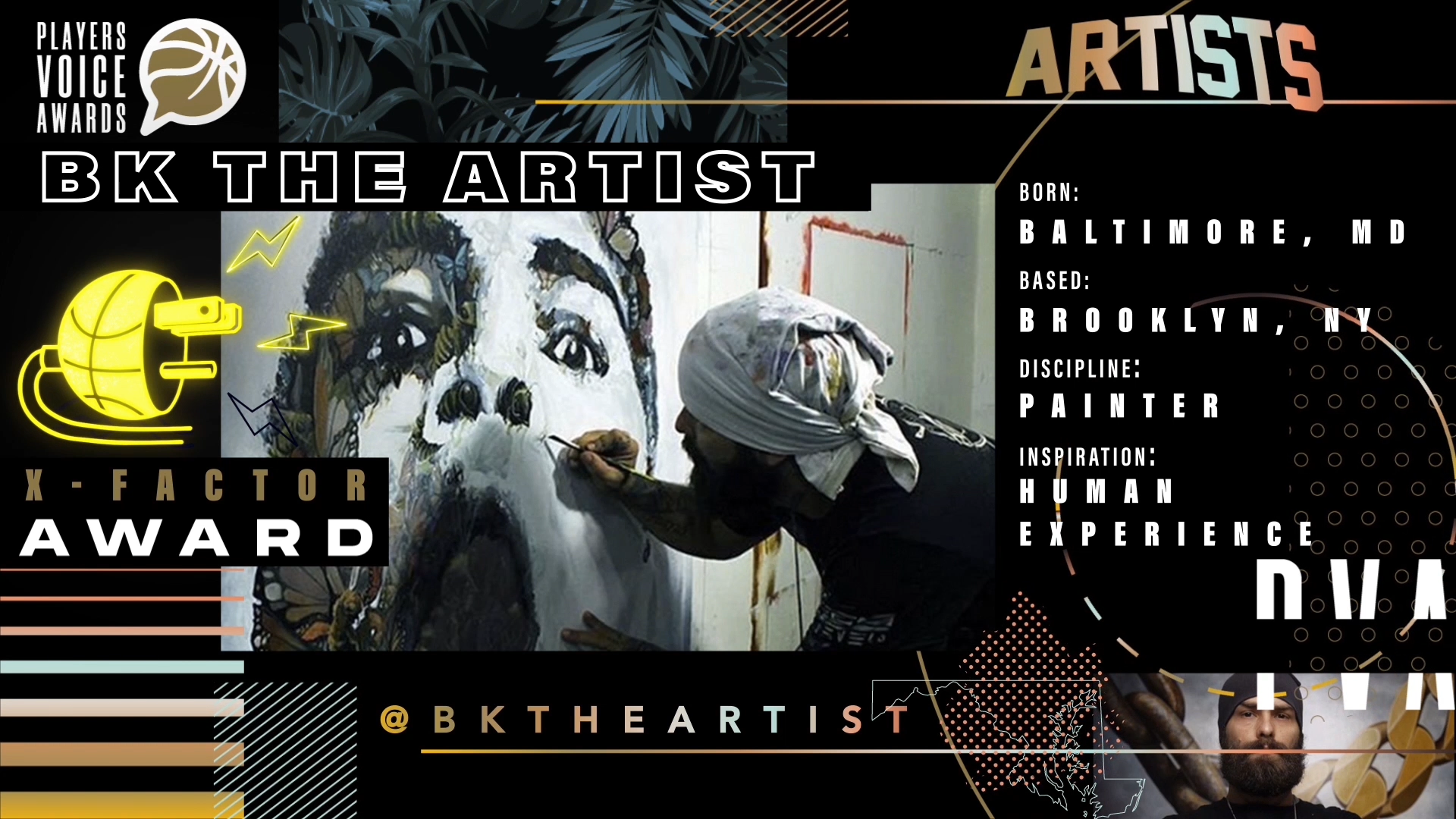 Gary Lockwood, better known as Freehand Profit, is a major fan of sneakers and the sneaker culture. He’s taken his passion to the next level in his artistry; creating his first sneaker mask in 2002 and has since worked with and for big time brands and retailers, deconstructing sneakers and creating masks to reform and represent the ancient art form of mask making. To award P.J. Tucker for his A1 shoe game, Freehand Profit takes a pair of classic sneakers to construct the 3D mask award. 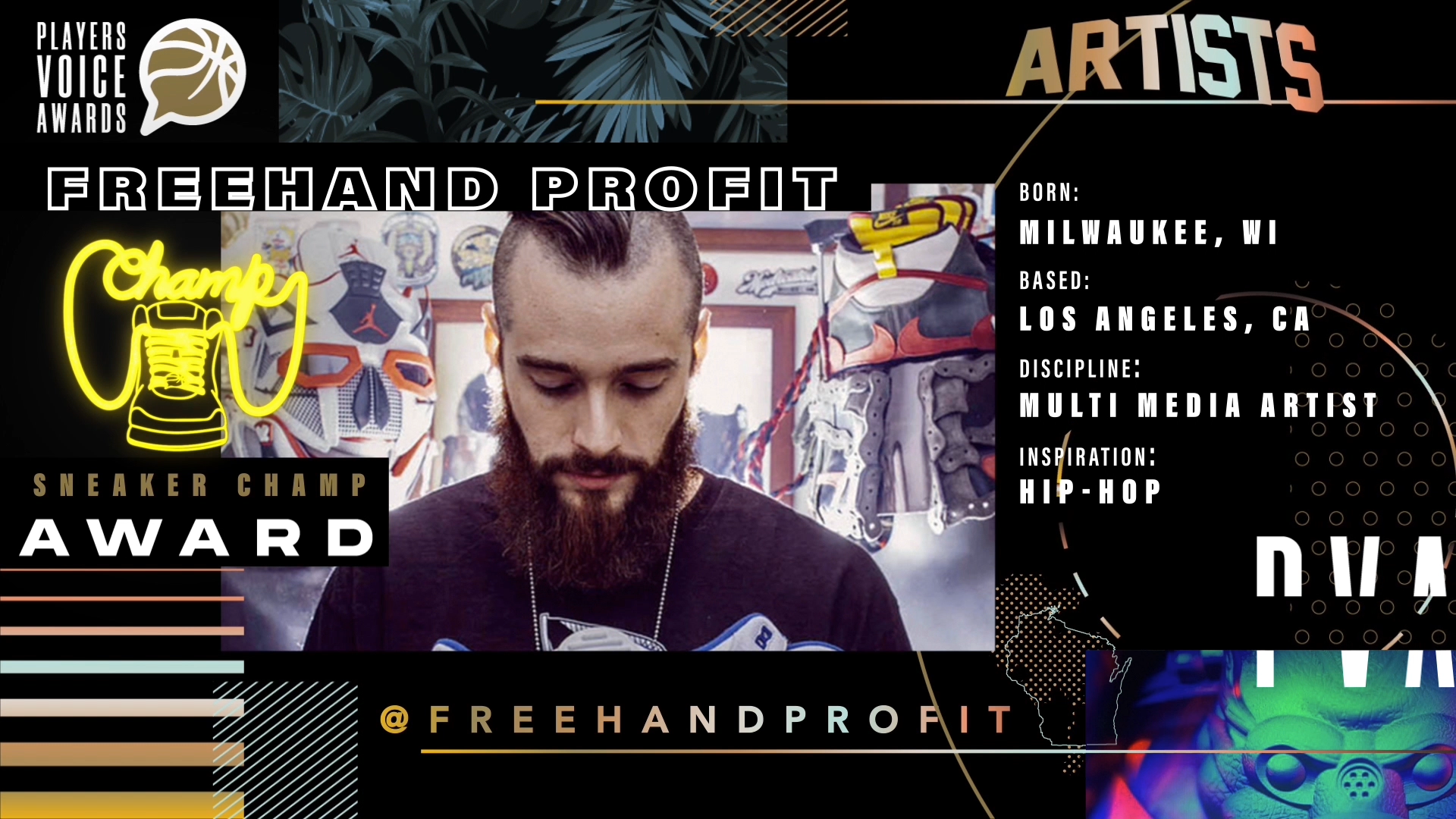 South Bronx based artist Devon Rodriguez works primarily with oil on wood panel bringing to life each subject with explicit detail. Gordon Hayward’s comeback this NBA season was as thorough as Rodriguez’s artistry from hyper-realistic paintings of strangers on the subway to celebrity portraits. The world remembers Hayward’s injury as clear as the photograph-like painting that represents Hayward: integrating the moment he horrifically injured his foot with the milestone dunk Hayward made off of his recovered left foot 9 months after the injury. Rodriguez’s award represents the comeback as Hayward watches himself from the ground to his momentous dunk. 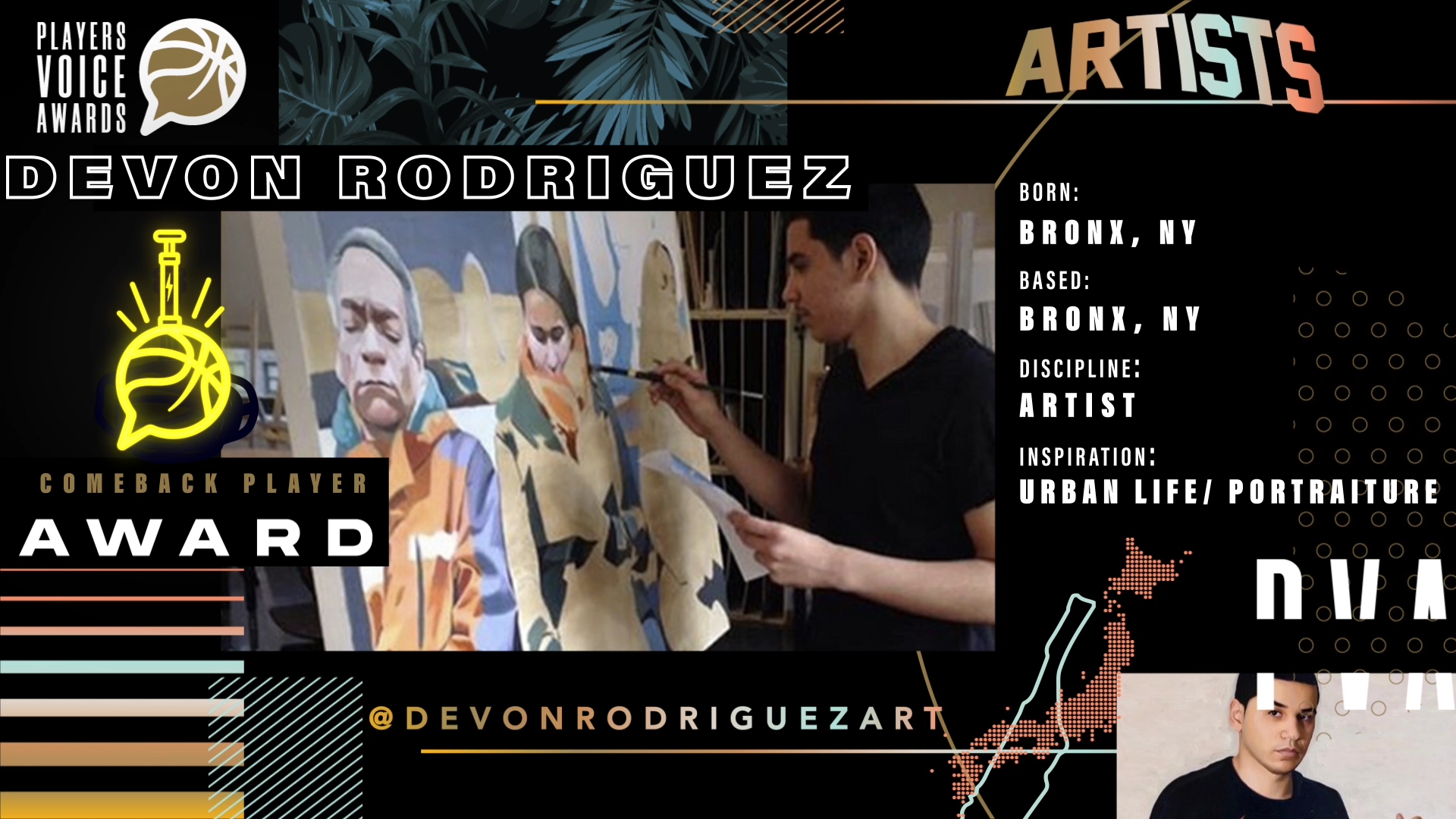 Bahar Caglayan, also known as Bahar Bambi, is a Berlin based artist who concentrates on the patterns of the Middle East and pop art portraits. Inspired by her Turkish roots, she brings the traditional art techniques back to the modern world by merging different styles of urban art with traditional geometric and symmetric shapes of the Middle East, called “The Magic Carpet Journey”. For the “Locksmith Award” awarded to Rudy Gobert, Bahar combines all of her styles into one painting for the first time. The painting for Rudy Gobert describes his journey as a defender and the success of making his dream a reality through strength and motivation which can be felt through her artistic and texturized method. 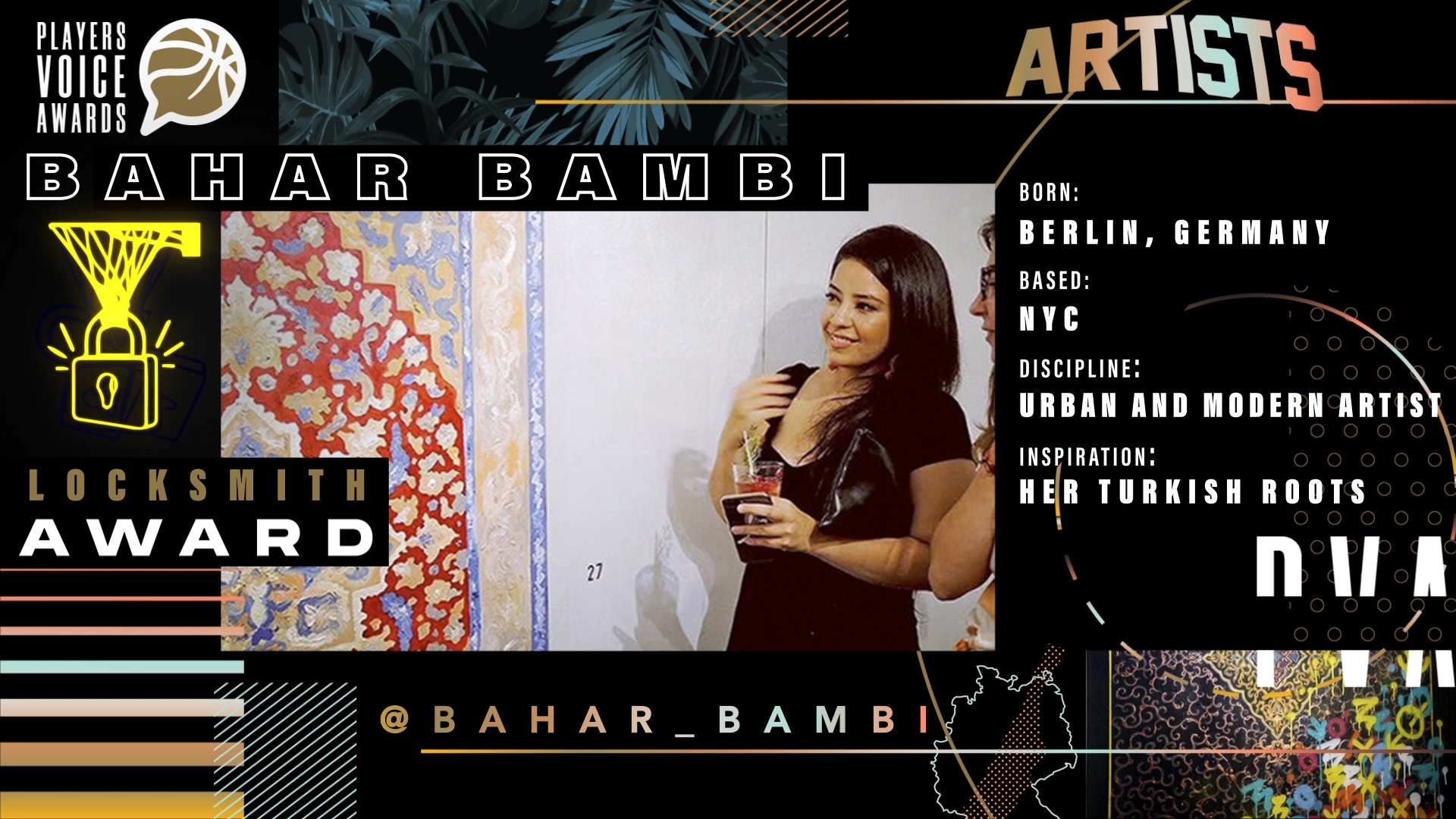 Originally from Toyko, Japan, New York based artist Dragon76 has taken the city by storm, dressing it up with his larger than life mural pieces. Inspired by the city’s frenetic mix of people from different backgrounds, and its capacity for giving rise to new cultures and identities, Dragon76 hones in on the concept of “coexistence” throughout his works. Intermingling unlike matters like past and future, stillness and motion, evil and justice, Dragon76 expresses the man and the machine that is the winner of the ‘Mr. Clutch Award’, Kevin Durant. He brings together the precise and dynamic movements of the All-Star as he seals the clutch shot against his defender. 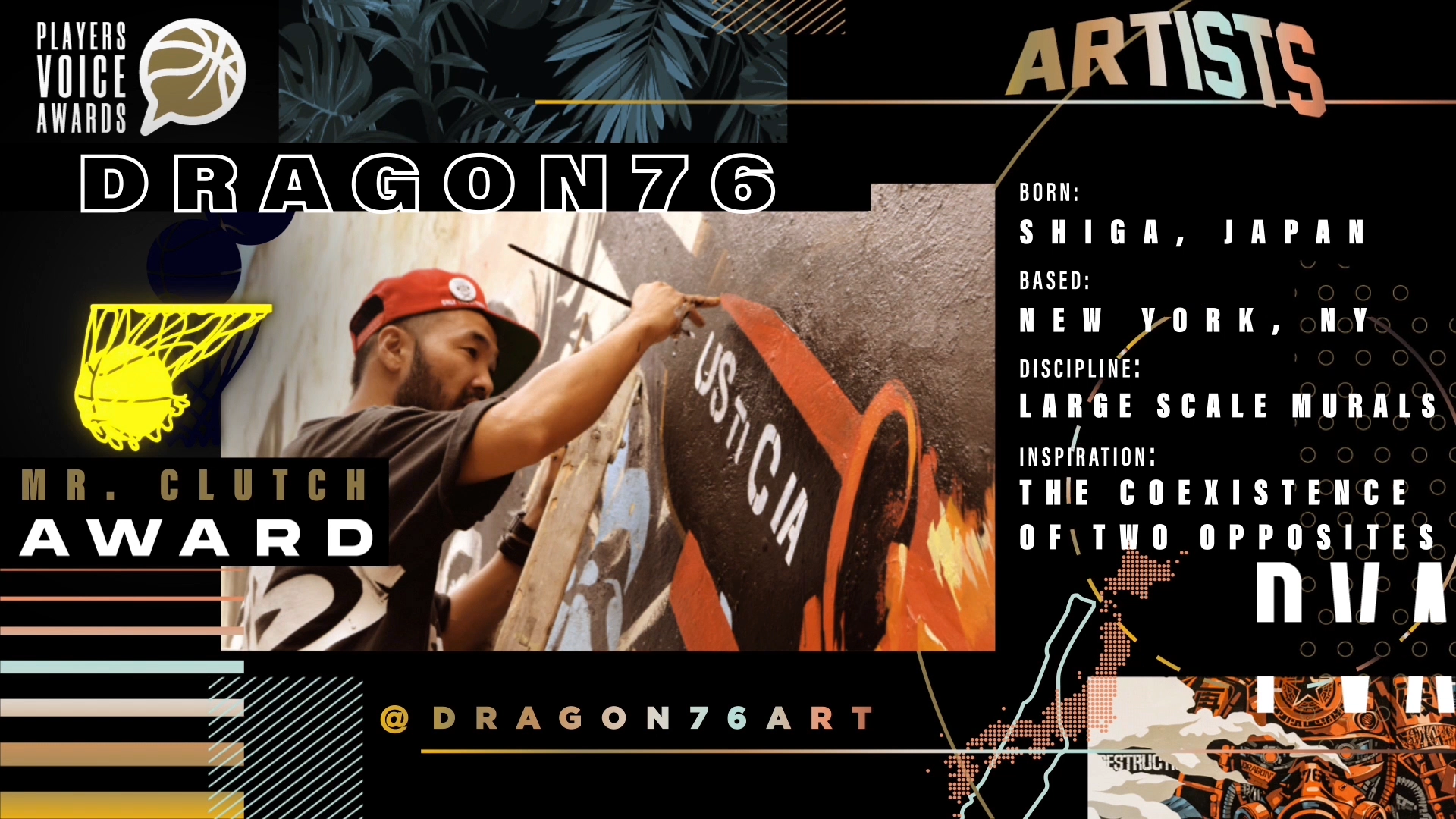 The NBPA Most Respected Award

Maryland based artist, Naturel aka Lawrence Atoigue, has taken over the contemporary art scene with his notable sharp, triangular illustrations. With a surrealist twist to his pop and cubic art, Naturel immortalizes Dwyane Wade and Dirk Nowitzki in the double awarded "Most Respected" award to the NBA greats. Naturel reimagines Wade in action dribbling just before piercing the heart of whatever he faces in front of him. Nowitzki is immortalized in a 48x48 in his unstoppable, signature one-legged fadeaway paired with a portrait of the legend. 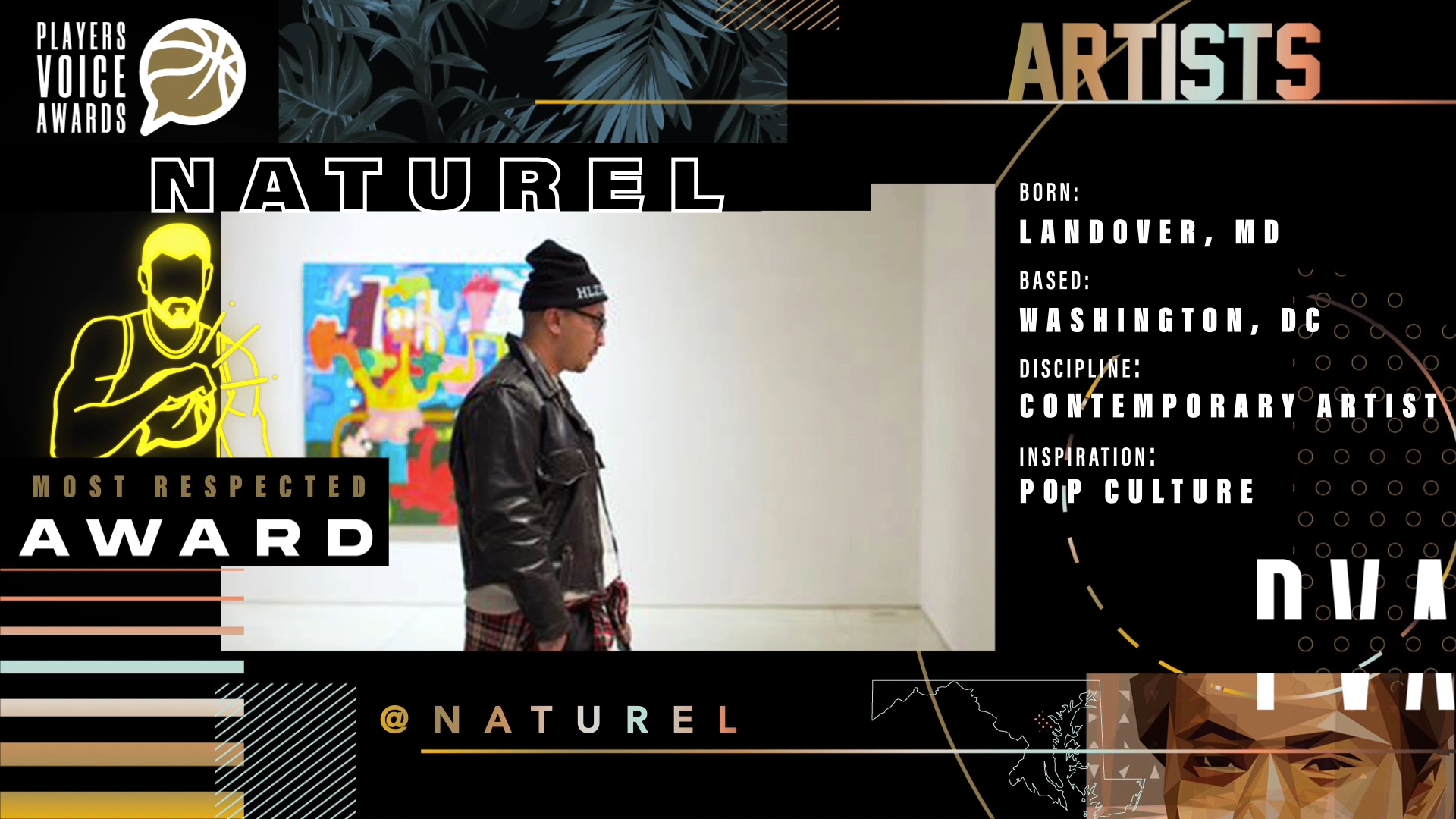 The NBPA Most Respected Award

Maryland based artist, Naturel aka Lawrence Atoigue, has taken over the contemporary art scene with his notable sharp, triangular illustrations. With a surrealist twist to his pop and cubic art, Naturel immortalizes Dwyane Wade and Dirk Nowitzki in the double awarded "Most Respected" award to the NBA greats. Naturel reimagines Wade in action dribbling just before piercing the heart of whatever he faces in front of him. Nowitzki is immortalized in a 48x48 in his unstoppable, signature one-legged fadeaway paired with a portrait of the legend.

The NBPA Leader of the New School Award

West Philadelphia street artist King Saladeen combines his fine art and graffiti style working with vibrant paint and mixed media to create, motivate, and inspire; representing friends and family lost to cancer. Through his works and life experiences, Saladeen created the character ‘JP The Money Bear’, often seen throughout his canvases and murals and now on the 4x4’ “Leader of the New School” award presented to Luka Dončić. 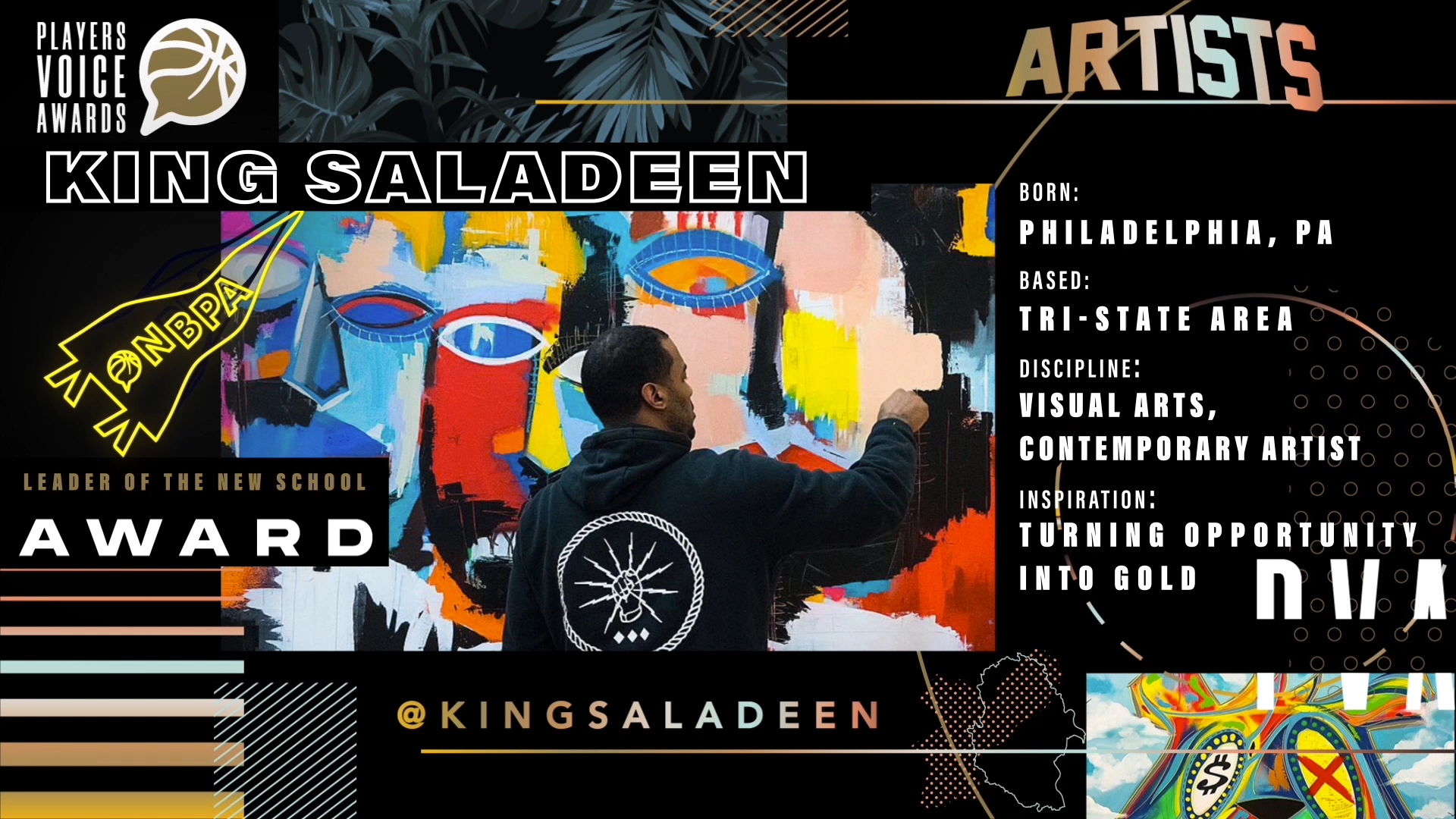 The NBPA Best Side Hustle Award

Maryland based artist, Naturel aka Lawrence Atoigue, has taken over the contemporary art scene with his notable sharp, triangular illustrations. With a surrealist twist to his pop and cubic art, Naturel uses a movie themed collage poster style to capture a few of LeBron’s more entrepreneurial moments outside of the hardwood. 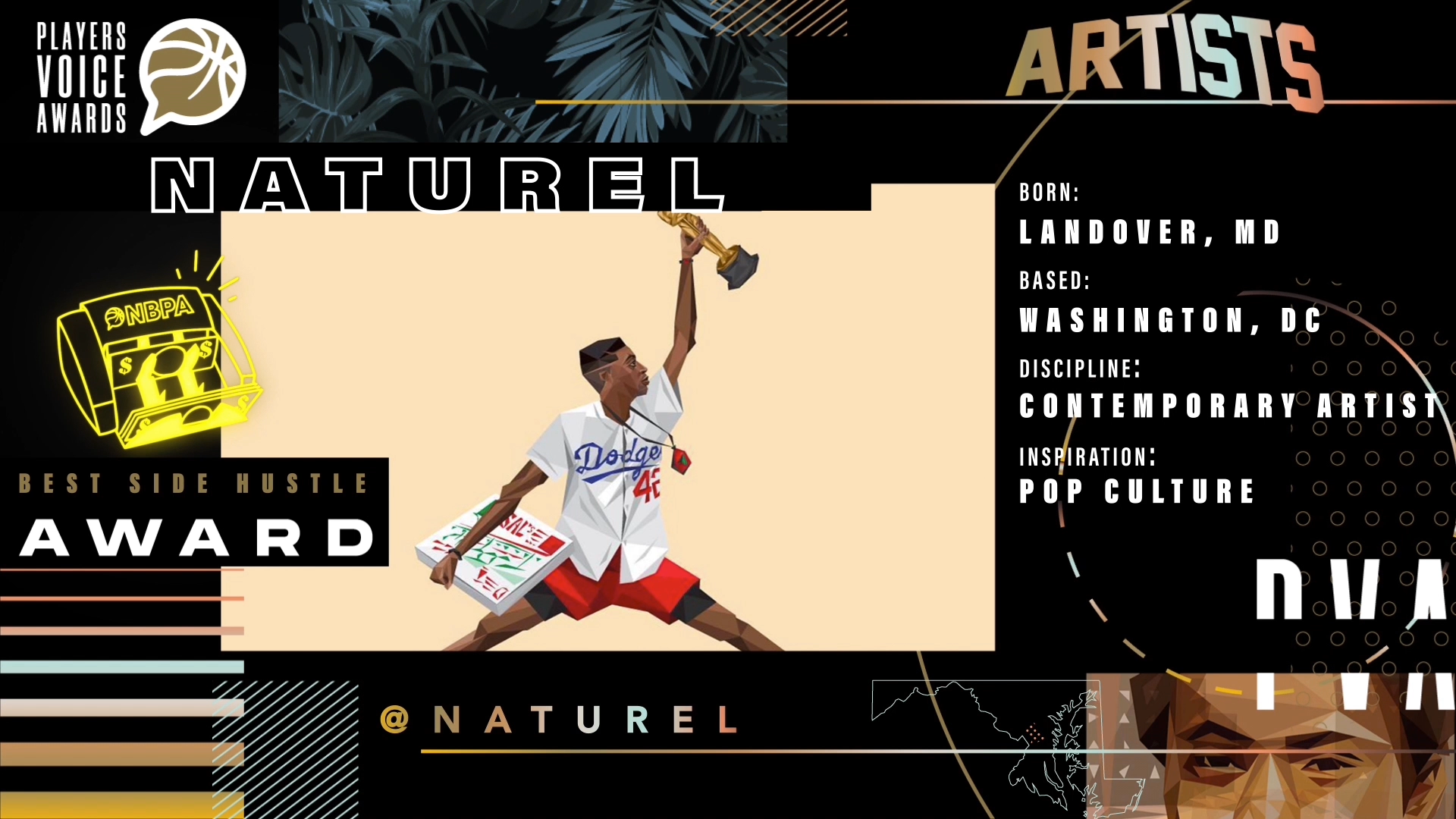 Bronx based artist Andre Trenier works in all mediums, from murals and memorial walls highlighting his spray paint technique to collaborative works, sculptures, and drawings. Painted in acrylic on a 4x4’ canvas, Trenier renders a marble bust of the Greek Freak, Giannis Antetokounmpo awarded “MVP”, invoking classic Greek sculptures much like those of the ancient known figure Julius Caesar. 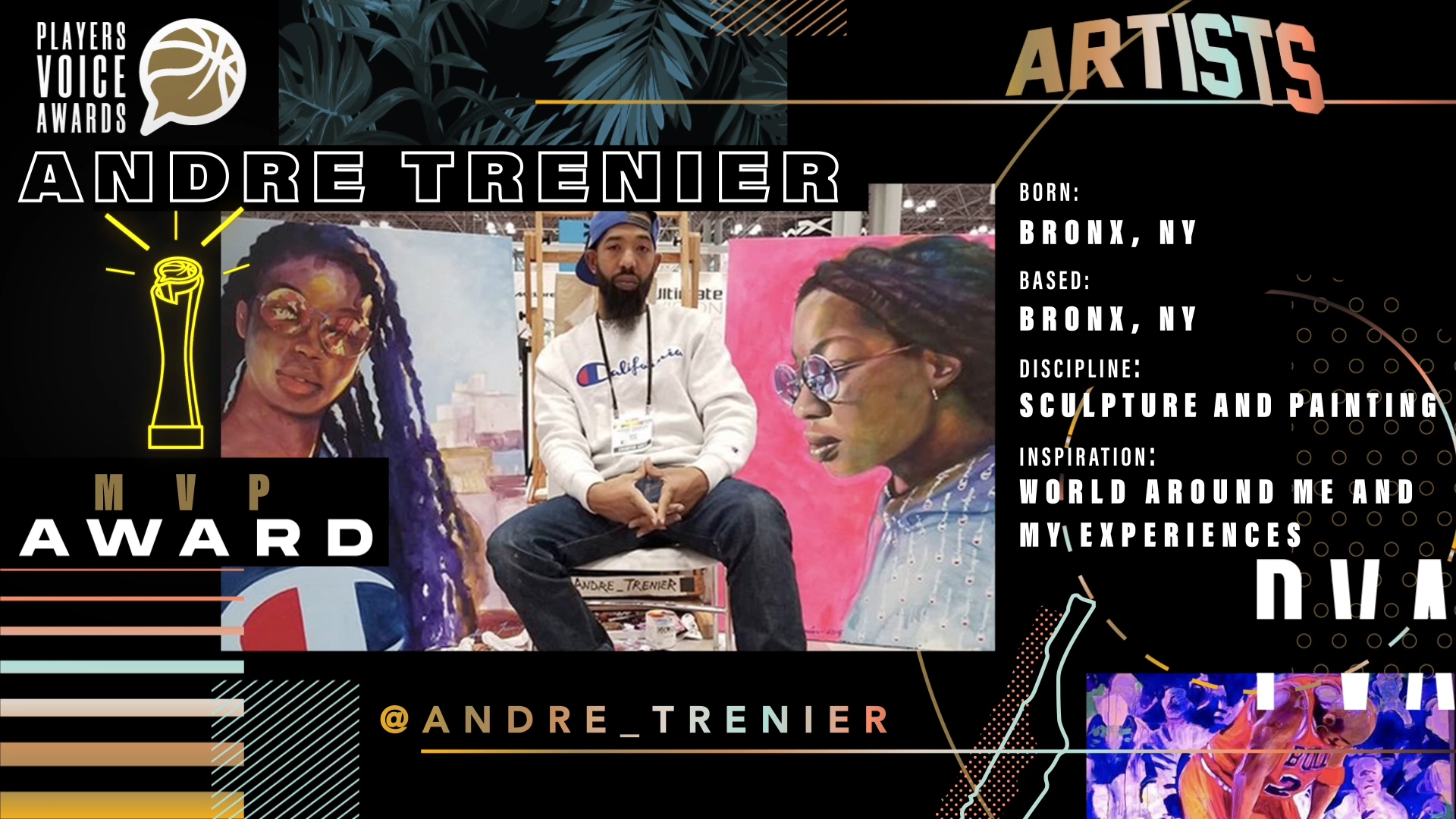 BK The Artist sifts through an impressive range of material and utilizes several distinct styles and clever metaphors to create and tell a story. For the ‘Freshest Award’ awarded to Russell Westbrook, BK executes his style on a wood cut silhouette of the well-known Christmas Tree car freshener. The 4x4’ is split fusing Westbrook’s style on and off the court. His style is born out of the attitude and brash confidence he displays on the hardwood; they are one and the same. A historic player and personality captured using a historic icon leaves no doubt who is the “freshest” – in the arena and on the asphalt. 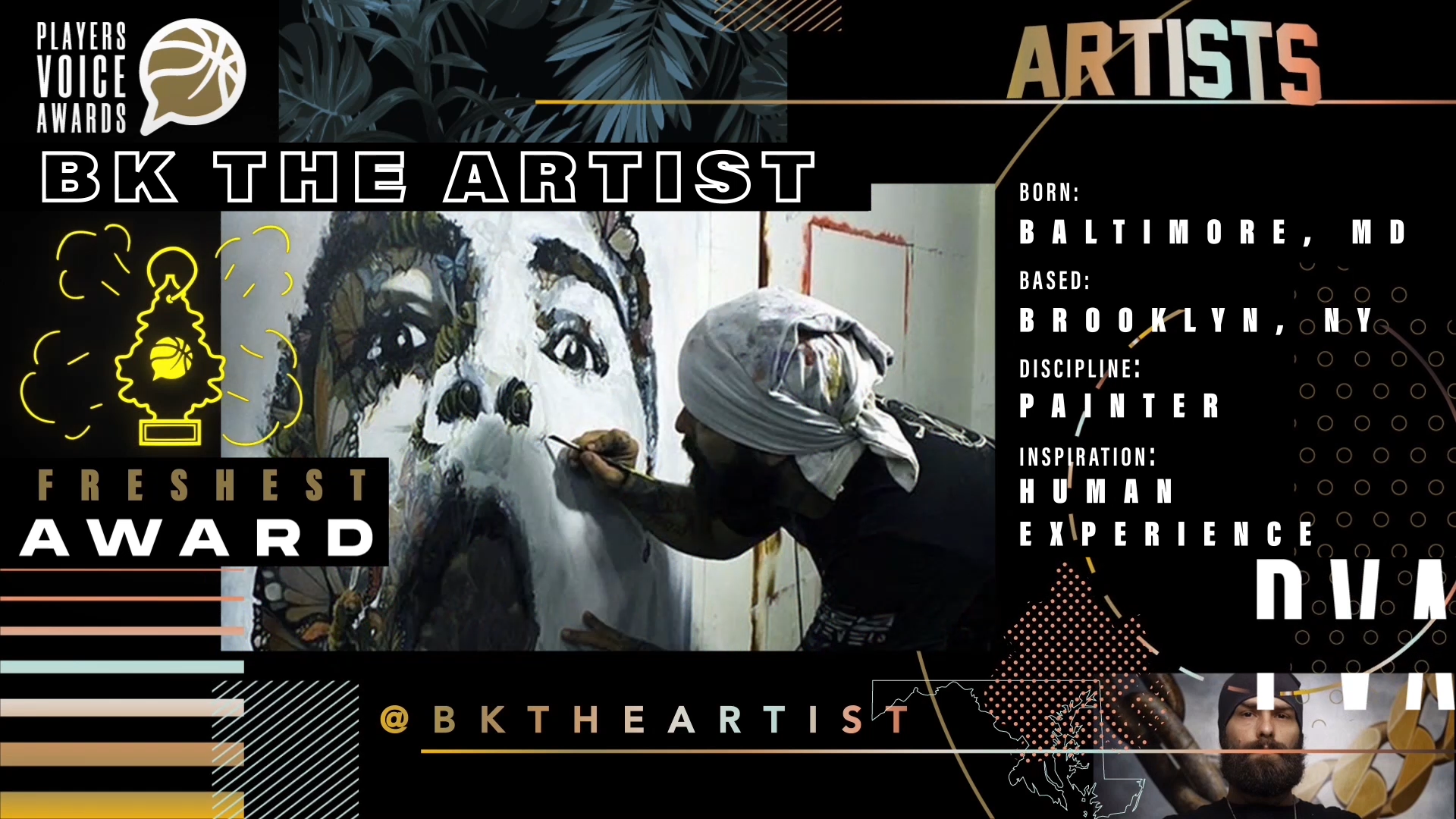 "American contemporary pop artist Ron English is one of the most prolific and recognizable artists alive today. Attacking the global landscape with coined term POPaganda, English’s technique mashes iconic characters and visuals with humorous undertones, creating characters of his own along the way that have been made popular collectibles over the last few years. 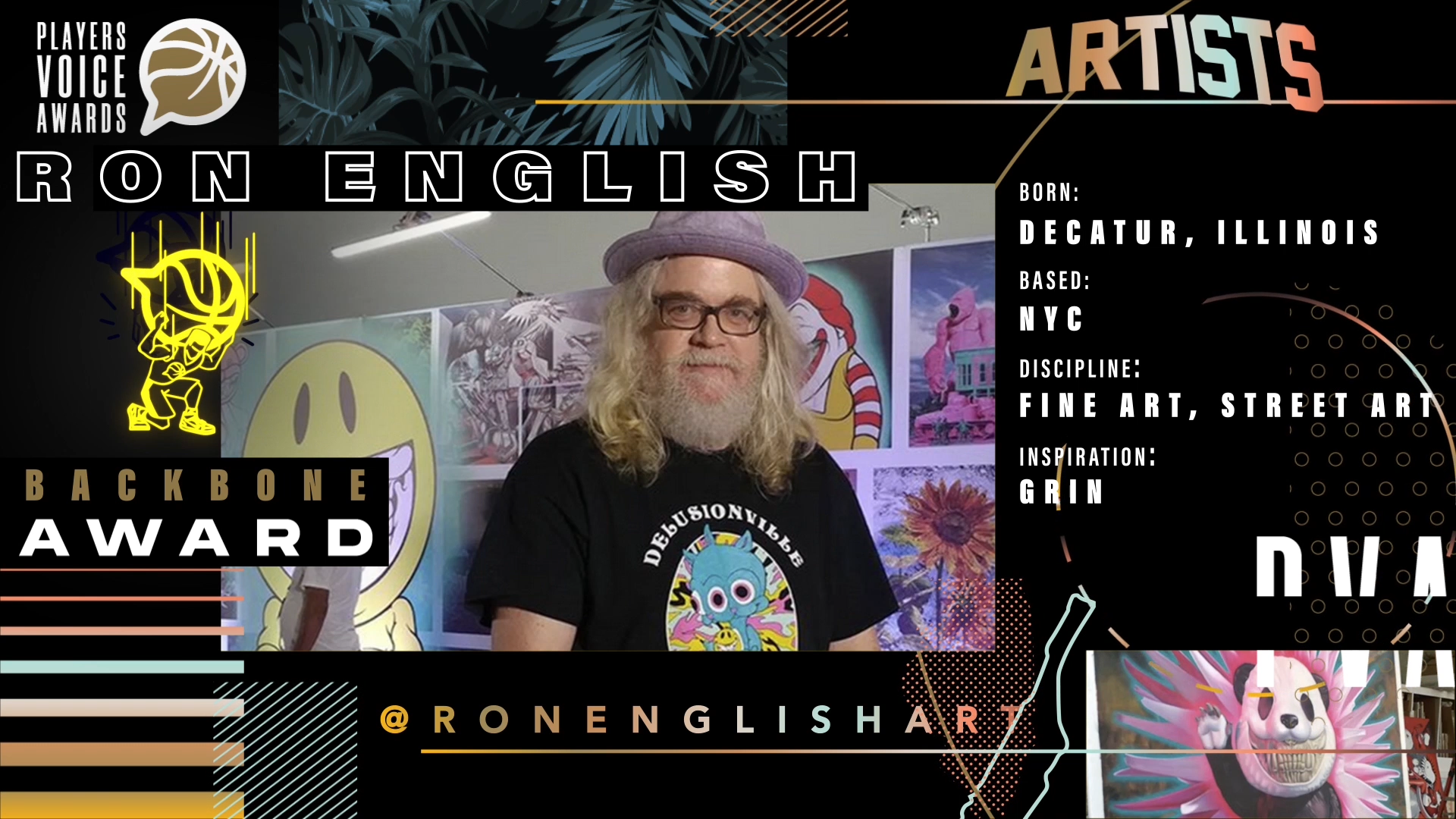 Chicago born, Brooklyn based artist Christophe Roberts is a multidisciplinary artist working in sculpture, design, and installation art. His practice explores complex masculinities and origin myths, through repurposed objects positioning a message and animalistic design. Objects included in the ‘People’s Champ Award’ given to LeBron James feature paraphernalia of the culture: boxes of the top sneaker brands. Through his signature technique, Roberts’ includes a 2D treatment on one side of his piece and a 3D approach on the other to symbolize the inner beast in James. Playing up the half human, half animal archetype, LeBron’s face and elements of sculpture come to life by way of LeBron sneaker boxes of his 9-12 sneaker series. 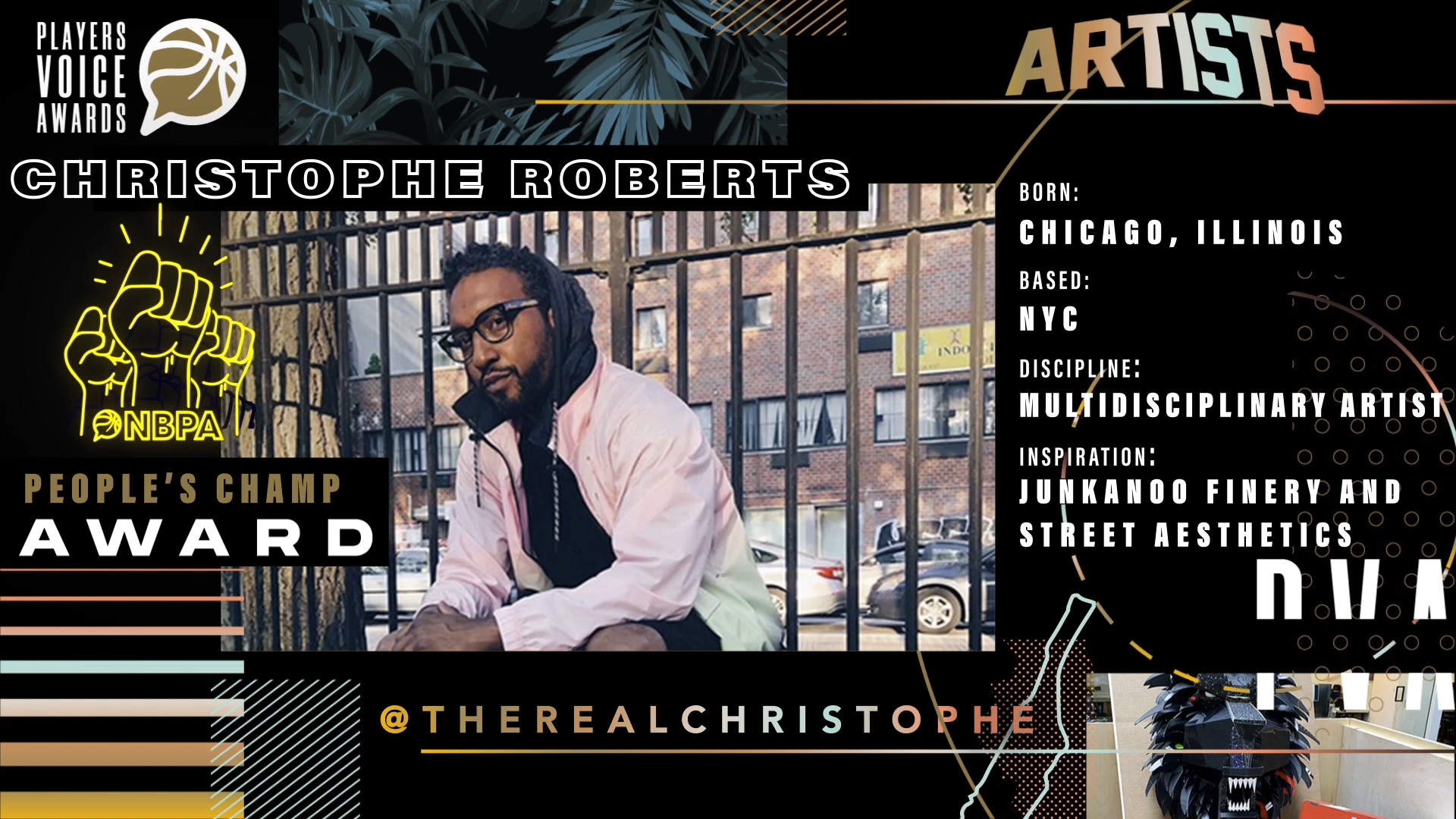